Eight PR Terms You Should Know But Only Vaguely Understand

Journalists, and the public relations people who work to sway them, deal in a jargon of their own. Before you wade into the world of the press, either via a chat with a reporter or the hiring of PR help, it would probably help to get a feel for this vocabulary.

Below, we’ve gathered eight terms that you’ve probably heard before but only vaguely understand.

An embargo is an agreement between a source and a media outlet that information—often contained in a press release—will not be published until a predetermined time. Venture funding announcements are often disclosed to journalists “under embargo.”

For example, a company that’s just raised $40 million in venture capital may reach out to several reporters, asking each if they’ll agree to review the details of the announcement under embargo. The embargo contains a time and date, i.e. Wednesday, March 25th at 9a.m. ET.

If journalists agree to the embargo, they agree not to publish any of the information held in the press release, or in related interviews, until Wednesday, March 25th at 9a.m. ET.

PR professionals often use embargoes to ensure that their clients or companies receive press from multiple outlets at one time. In theory, an embargo ensures that no single reporter gets to “break” the news, but that each gets equal access. The practice also helps amplify the news on a single day, helping the company reach a broader swath of its target audience. 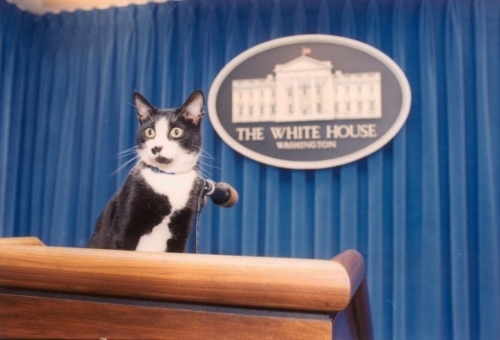 Socks only talks "on background"

The predictability of such announcements is an added bonus. (For companies, at least.)

Of course, embargoes don't always work in practice. Sometimes news outlets intentionally break them in order to get a leg up on their competition. And sometimes they break them, "by accident."

In theory, breaking an embargo results in some kind of consequence for the offending journalist and media outlet. But, like anything else, this consequence depends on the power dynamics at play.

The only recourse for a publicist burned by a reporter who breaks an embargo is, maybe, an angry email and phone call, along with a promise to withhold future information.

If the company is one in which the media is very interested, the threat of withholding future information may be meaningful. This is especially true if the opposing media outlet is relatively small or lacking in influence.

On the other hand, top-tier publications, like The New York Times for example, often have less to lose by breaking an embargo. Since their coverage is so valuable, and their access to information is so broad, they may feel like they have the upper-hand in any embargo-breaking squabble.

You should always be aware of the power dynamics at play, and even individual journalists’ embargo track records, when using this technique.

Warning: Different journalists can interpret the following four terms in different ways. We have tried to define them here as they are most widely understood, but it would be wise to clarify a journalist’s understanding of the relevant terms before any related discussion.

And frankly, some journalists ignore them altogether. So be careful.

The information that you provide and the wording that you use can be published and attributed directly to you. Pretty straightforward.

The information that you provide cannot be used in print, in any form. In theory, the journalist never heard what you said.

Obviously, that theory is sort of ridiculous. Of course they heard what you said. And now, they can try to independently verify your off-record information from other sources.

If you are considering telling a journalist something off-record, it would be wise to ask yourself: Why? Sources often do this to provide context to journalists, to help them better understand the actions and motivations of themselves or others without allowing them to publish the details of that context.

This is a very risky move. If the information you reveal is sensitive enough to merit the stamp of "off-record", it's worth rethinking its disclosure in any form.

Some mid-way point between off-record, and on-record. This information can be published but can't be attributed to a specific source, or even a conversation. It sort of pops up out of the ether when published in an article.

On background can serve as a helpful means of engaging with the media when a source prefers to preserve his or her anonymity, but still wants certain information broadcasted. Generally, sources who speak on background cannot be directly quoted.

On the spectrum between on-record and off-record, not for attribution is closer to the on-record side of things. When speaking not-for-attribution, a source provides the media with information that can be used and quoted, but only attributed to a general, mostly anonymous source - i.e. "a rival company," "a person familiar with the deal," or "a New York venture capitalist." Sources and reporters generally agree upon the exact phrasing of the attribution beforehand.

Similar to speaking on background, not for attribution helps to preserve a source's anonymity while allowing him or her to work with a reporter and publicize information that may drive their own goals.

Pretty much what it sounds like. It’s a list of the media relevant to your company, news story or campaign–the journalists whom you think might want to write about you. It’s an essential part of most PR efforts.

Developing a good media list, one that’s composed of people who might actually care about your story, takes more time and expertise than you might think. It ensures that you’re not wasting your time, or worse, pissing off journalists who will mark your pitch as spam.

You probably know what a press release is. They look like this.

What you might not know is that there are several “wire” services that you can pay to deliver these things to the media. PRNewswire has the broadest reach–and hence the biggest price tag–but others include PRWeb and Business Wire.

Unless you’re a huge company whose every move is watched by the media, press releases alone will rarely get you press. But they will help with SEO, and sometimes they’re used simply to document an important event in a company’s life.

Press releases serve four other critical roles in my opinion:

They provide information and quotes for journalists in one easily-digest document. This is especially useful for online reporters who might write 3-5 posts a day.

Ugly Duckling Exclusive
This term came up during a panel discussion, but may not be commonly used.

Regardless, it refers to an exclusive that consists of inconsequential or uninteresting news. A PR rep, for example, who recognizes a client announcement as uninteresting, might package it as an exclusive in an attempt to give the news a veneer of desirability and heft. The hope is that at least one reputable outlet will take the "exclusive" bait and run with the story.